David has always been interested in merging the various realms of his creative interests. While he was studying ballet, he was offered an opportunity to merge his interest in dance with his interests in painting, theater and performance art. In 1991 the director of the school where he was studying approached him and asked if he would be willing to create a 21’ x 38’ backdrop for the yearly school production of “the Nutcracker” depicting the “Land of Snow” for the final scene of Act 1. David researched images from past Nutcracker production by other famous companies and offered a selection. An image was chosen and he undertook the risky task of creating a first-time unique large format image on an unfamiliar medium that was needed on a production deadline. He selected an image that was only two colors, black on white, and allowed for an abstract interpretation. The completed backdrop image can be seen in the “Backdrops for rent” section of this web site.

The drop and contribution it made to the overall production was a success, and so the school asked if he could produce 4 additional drops for other ballets. David declined stating that he needed time and space to develop the necessary skills, tools and techniques needed for producing large format images on silk. Surprisingly, the school offered him a giant warehouse studio (an unused part of U. C. Berkeley facilities) for a year so he collected several of his silk-painting friends and offered to share the space with them in exchange for brainstorming the development of this medium.

David went on to create the promised backdrops, which became part of the ballet school inventory, then he went on to creating additional backdrops for the other performance community he participated in, Middle Eastern Dance. In 1996 he created two 24’ x 40’ silk drops for the Rakkasah Festival, and then realized that most Middle Eastern performances were offered in studio-sized rather than theater-sized venues, so he went on to produce 3 more 12’ x 24’ studio sized drops. All of these can be seen in the Backdrops for Rent” section.

In 2002 David was approached by Miles Copland of Arc 21 Music (manager of Bellydance Superstars) to create his first large format images to be digitally printed on Textilene, a synthetic material specifically designed for theater use to be durable, fireproof, waterproof and fade-proof.

He created several drops in this medium which began touring the world to venues such as the Folles Bergere in Paris.

In 2003 David was asked by a New York dance teacher and event producer Dalia Carella to produce another digital drop for her Off-Broadway production of “In Search of the Goddess” a dance/musical about the life of Ruth St Denis. He also produced a studio-sized silk drop titled “Cordoba” for a smaller production of hers.

These drops were added to his general backdrop inventory.

After 2004, the world of stage set design began its rapid evolution into the digital realm, and projected images gradually took the place of hanging backdrops.

In a culture that pays little attention to the true costs of theater, requires grassroots production to be on a financially limited and at the same time is always seeking “more” and needs to be dazzled, hand-painted backdrops were unable to keep up. Projected images, smoke, glitter and flashing strobe lites are now the expected norm. Bellydance, when it responds to its subtle cultural roots, finds the soft sophisticated images of hand-painted traditional middle-eastern interiors a better match to the presentations on stage, than the high-powered digital trends. 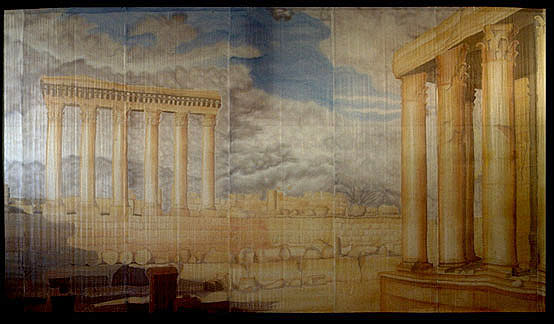 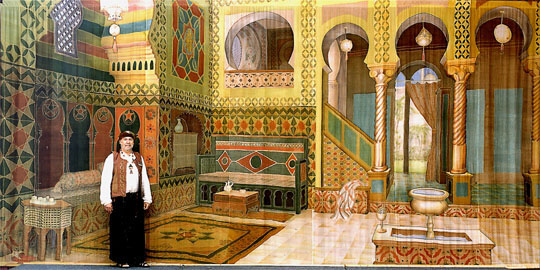 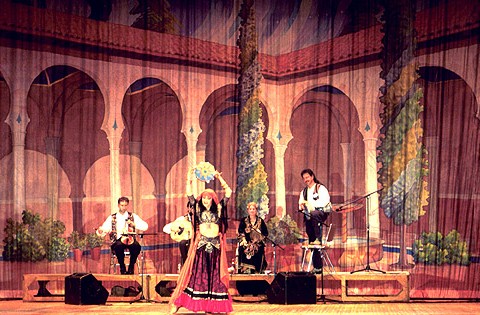 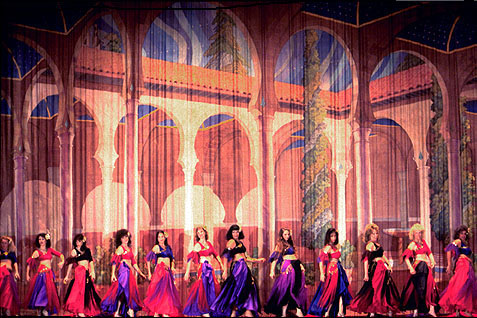 Land of Snow – The Nutcracker 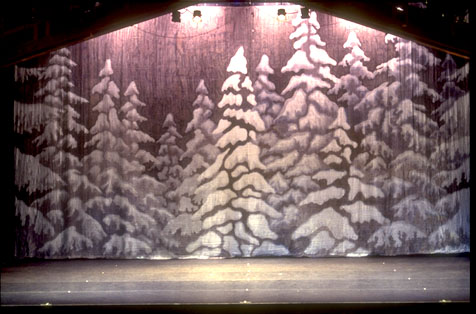 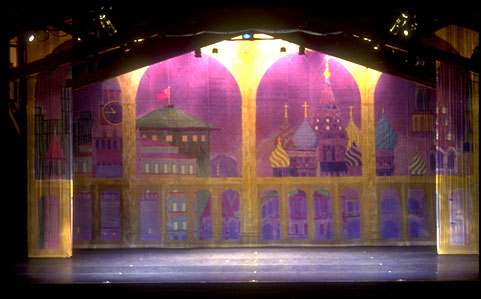